The Ballad of The Lost Decade 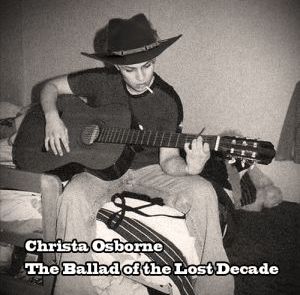 Merle Haggard’s music may possibly be the most depressing force on earth I’ve ever known. My relationship to this man’s crooning began many years ago when I worked at a flea market on the outskirts of a southcentral Kentucky town called Bowling Green. Now normally, a gen X-er such as myself would probably never come to know Mr. Haggard’s music in any mainstream way. The DJ’s at 107.7 have never given his tunes a spin, at least to my knowledge, probably owing to the fact that he hasn’t been on the charts since 1937 or something. Nor have I ever seen him on MTV or VH1—and that’s including reruns of The Surreal Life, which I credit with giving me an intimate portrait of the musical careers of Charo and Flava Flav (both in season 3, arguably the classiest). Even when I flip over to the country radio stations or CMT, never once do I hear his woe-filled twang reaching out to kill happiness through the airwaves. I mean, I couldn’t point out the man in a line-up. Merle Haggard could rob me in broad daylight and the police could put him with five other bearded old men and say to me, “just pick out Merle Haggard,” and I couldn’t do it. But I know just about every Merle Haggard song ever recorded, and could recite just about every lyric. It’s a tragedy I live with daily.
The flea market job in which I came to be acquainted with Mr. Haggard started when I graduated college the first time. Yes, I said the first time. No one could have predicted that a bachelor’s degree in English without a teaching endorsement would somehow fail in putting me on the fast-track to a nice bureaucratic government position or some corporate cushfest. But there I was, all dressed up with no place to go. While waiting for someone with influence to recognize that I was a brilliant gem simply covered in the dust of hicktown, I snagged a temporary gig selling money. Yes, selling money. This sounds confusing, but after years of trying to explain it to people, I have come to the conclusion it’s the only way to put it really. I sold money to people for more money than the face value of the money I sold…to them. I hope this clarifies it. Okay, basically I sold collectible coins. You know, like old money made of silver or gold. Or in the case of really old pennies, I believe the composition materials consisted of cart horse dung, the blood of the oppressed, and the tears of factory children. I deduced this based only on my sense of smell, and let me say here I do not recommend smelling old pennies up close.
At any rate, I worked for a guy who looked like a cigar-smoking version of Santa Claus, complete with white beard. “Why don’t you come to work for me,” he said with a twinkle in his eye and laying his finger aside of his nose. I pondered it, wondering if the intended position was as a holiday elf, as I’m rather smallish and was once confused as a leprechaun at an Irish bar on St. Patty’s Day (the guy was too drunk to pee straight so I didn’t give it much credence, although it did tend to mess one’s self-esteem when on a first date). So anyway, I took the job since my brilliance had not yet been recognized and my strategy was to bide my time by hanging out in places frequented by really really old men who smell kinda funny. This Santa guy I worked for had a store in town, but he also had…yes, a booth at the local flea market. Because flea markets are where you find old crap for sale. And new stuff that you could also get on QVC. And fleas. Anyway, the locals who frequented this market called it “the mall”. I’m not sure if they realized there was an actual mall just a couple miles away, but I honestly believe this was the only “mall” of which they were aware.
An average day at the mall consisted of:

1) My (often futile) attempts not to interact with the locals, whose general appearances might be summed up as a fashion collision between the healthily mulleted 1992 Billy Ray Cyrus and Tammy Faye Messner circa 2004—you know, when she was on The Surreal Life season 2 with Vanilla Ice. Did you know her eyebrows were actually tattooed on? Anyway, add to the above pairing a hardy helping of airbrushed t-shirts with holes, a sprinkling of uni-brows and sagging tits, and a dash of something that just crawled out of a garbage can (fleas included) and I think you’ve got it.
2) Eating at a concession stand where I might choose between any number of mixed processed meats injected with fat and fried to perfection. And as the vegetable, perhaps a pickle the size of a large dildo, individually wrapped and stewing in its own juices. Or nachos. That’s a vegetable, right? Well anyway, the chips are made of corn, so I counted it.
3) A mid-morning break in which I’d go cry in the bathroom stall for up to fifteen minutes at a time while the sock lady or Indian dream-catcher guy watched my booth.
4) Dusting off the Hot-Wheel display—oh yeah, I forgot to explain that the Santa dude who was my boss also sold little toy cars to adult men in their forties trying to recapture their childhoods to subsidize his income from collectible Sacagawea dollars and what-not. It was good business.
5) Singing along to Merle Haggard despite all attempts to drown out the bastard. The CD/cassette tape guy across the way played nothing else. Did I mention the sound of “Mama Tried” is sadder than orphans crying?
6) Spying on the only other coin dealer in the whole flea market. You had to watch that guy, or he’d steal your customers right out from under you. The market was a battlefield, and we booth keepers were warriors.
7) A mid-afternoon bathroom cry break, in which I got the doll lady or the “you might be a redneck” sign guy to watch my booth.

Me: Hi how are you today?
Them: I got the head lice from Howard down the hall!
Me: Oh dear, I’m sorry to hear that.
Them: And the Lord God said I am a jealous God, visiting the iniquity of the fathers upon the children into the third and fourth generation of them that hate me.
Me: Huh?
Them: What the hell did you do with my dentures?

The Ballad of the Lost Decade…